Rovigo is a small Venetian town. We will propose an itinerary that will allow every tourist to visit the most important monuments in a single day.

As a place for breakfast we offer a bar opened recently in Via boscolo named: BAD WOLF. This American style bar offers drinks and American style food. If instead you want to have a more classic breakfast you can opt for the bar in Piazza Garibaldi named THUN. It rises in the same place where previously stood the historic “coffee bag”.

The first stage of our morning itinerary, which will take place among the monuments symbol of Rovigo, begins at: CASTELLO DELLE DUE TORRI. 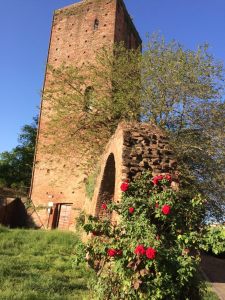 The Castle of Rovigo is the oldest building of the chief town of Rhodes. Important medieval fortress, over the years has been the victim of abandonment by the authorities that have succeeded in dominating the city. Since the 1960s, however, there has been a major attempt to revalue the area. In the centre is the famous Torre donà, one of the highest among the medieval towers with its about 60 meters, located next to the Torre grimani. Both towers, due to structural failures, are now hanging.

Then we will move to PALAZZO ROVERELLA.

Palazzo Roverella is a palace of Rovigo, majestic testimony of the Renaissance and “Estense” period of the city, which overlooks Piazza Vittorio Emanuele II, the main square and the ancient and modern heart of the capital of Rovinj.

After visiting the building we will be active at the two squares of Rovigo: PIAZZA VITTORIO EMANUELE and PIAZZA GARIBALDI. 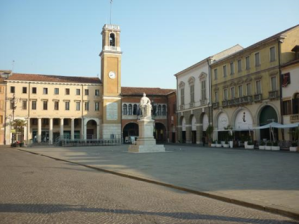 Main place of the city, a hub of political, social and cultural life in Rovigo, Piazza Vittorio Emanuele contains institutional and cultural buildings (including the Accademia dei Concordi, Palazzo Roverella, Palazzo Roncale and the Loggia dei Notari) and the most famous monuments of the capital of Rovigo.  The square has a trapezoidal shape and, although it changes its appearance several times over the centuries, it has always maintained a ‘medieval’ architectural style, still preserved to a large extent today, and above all has maintained its function as the main place of aggregation of the city; prerogative, the latter, which therefore maintained and developed during its secular history.

On the current Piazza Garibaldi, one of the most important in the city, stood the church of 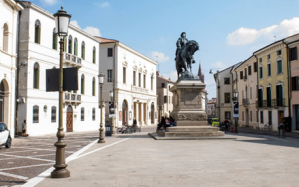 Santa Giustina, later demolished in 1808; it is still possible to see its position, since its plan is drawn on the listòn of the square. Piazza Garibaldi is rich in important buildings that rise around it: let’s think of the Chamber of Commerce building, the coffee shop on the Stock Exchange, or Palazzo Ravenna, the Teatro Sociale and Palazzo Silvestri.

But the history of Piazza Garibaldi, from the moment of its “birth”, has also been enriched by an important stage: it was, in fact, the seat of the largest fruit and vegetable market in the city.

In piazza Garibaldi we also find the TEATRO SOCIALE.

The TEATRO SOCIALE of Rovigo is an Italian Opera Theater. Designed by the Rodigino architect Sante Baseggio in neoclassical style, it was completed in 1819 and rebuilt on the original model in 1902 due to a serious fire.

Thinking then of reaching the museum of the great rivers you can go through PORTA SAN BORTOLO. 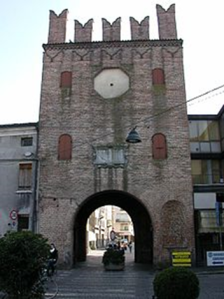 The Porta San Bortolo is the best preserved of the two remaining city gates of the city walls of Rovigo. Its structure, made of terracotta with a single arch, overlooks the present Piazza Umberto Merlin, connecting the city center with the southern district of San Bartolomeo from which it derives its name. 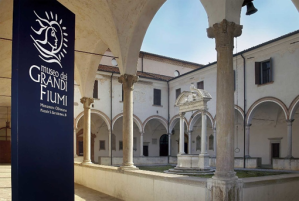 The Museum of the Great Rivers is a museum in Rovigo, located in the former Olivetan monastery, dedicated to the evolution of the social structure of civilizations and communities built on the banks of the rivers that characterize the territory of Polesine, reporting the analogies with the evolution of European populations born and developed in the vicinity of large watercourses.

The church of San Bartolomeo, popularly known as San Bortolo, is a religious building open to the Christian worship of the Catholic Church in Rovigo in Piazzale San Bortolo adjacent to Via Antonio Oroboni. The structure, one of the rare examples of 16th century religious architecture in Polesine, incorporates some Baroque elements such as stucco and frescoes from the following century.

Administratively part of the original diocese of Adria which later became Adria-Rovigo, it has been the seat of the parish of San Bartolomeo Apostolo since 1956 and was the church of the adjacent monastery of the Olivetans, suppressed in 1797, preserved in the structures but not in the state of use.

Inside there is one of the organs designed and built by the Atestino Gaetano Callido dating back to 1778. The instrument is located on a choir beside the main altar, and is still functioning.

Now after a fairly long ride it’s time to think about the lunch break. To savor good and affordable dishes you can go to the TRANI restaurant.

After lunch we start the second part of our itinerary based on Rovigo’s requests. 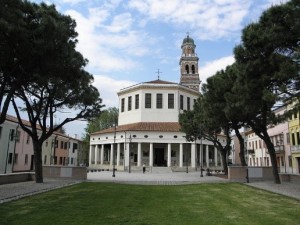 The Chiesa della Beata Vergine del Soccorso called La Rotonda is a religious building, peculiar for its octagonal architectural form and for the historical-religious events related to the socio-cultural evolution of the city. The interiors are certainly the most fascinating part of the building. Heart and fulcrum of the liturgy, the wooden altar of the Rotonda was carved by Giovanni Caracchio and placed in the church in 1607, although according to some sources the original drawing belonged to Francesco Zamberlan. However the real problem that appeared immediately to the author was the enhancement of the small image of the Madonna del Soccorso in a church whose dimensions were gigantic compared. The solution was to have the painting supported by a set of angels, surrounding the latter, in the presence of the blessing Creator who surmounts the entire scene.

Going straight on the same street where the Rotonda is located, we can find the CHIESA DEI SANTI FRANCESCO E GIUSTINA.

The church of Santi Francesco e Giustina is a 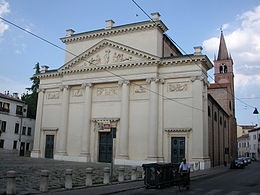 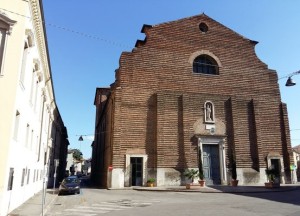 The last church we will visit is the DUOMO.

The Cathedral of Rovigo is a church dedicated to Santo Stefano, pope and martyr. And the Co-Cathedral of the Diocese of Adria-Rovigo and is the parish church. The interior of the cathedral preserves valuable works of art, especially pictorial.

At the end of our journey we offer, before a dinner in the best pizzerias in the center, a quick aperitif at a bar recently opened in the center, but which has attracted many customers: the CORSOPOLITAN. This modern style bar is located where the “civico 233” pizzeria used to be and now offers events for the town.

After the aperitif we can taste a good pizza or in the vintage pizzeria IL VINILE or in a more refined pizzeria like LA TAVERNA DEL PITTORE. These two are both inside and are the most popular in Rovigo for taste and hospitality.

We hope that this itinerary can be useful to anyone who wants to visit Rovigo, even just in one day!

(photos and documents have been taken and processed by wikipedia)